Peter Webster’s new book on The Edited Collection: Pasts, Present and Futures is published by Cambridge University Press. It is part of the Cambridge Elements series on Publishing and Book Culture.

In the last decade and a half, a strong and negative general theory about the edited collection has taken hold in academic life; a pervasive and tenacious set of memes that have lain largely unexamined. Edited collections are suspected to contain work of a generally lower standard than scholarly journals, due largely to a less stringent regime of quality control; they are also supposed to be incoherent as volumes, being often no more than the sum of their parts; they are (it is thought) less visible to potential readers once published. 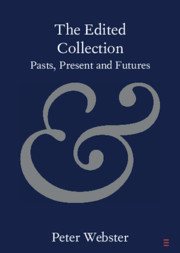 By no means all authors would accept the critique. However, it is often understood that those who make important decisions – on hiring, promotion, tenure and funding – do view collections in this way. To publish in or edit an essay collection is to risk being penalised for the format before even a word is read.

This book is the first extended critical examination of both the perception and the reality of the edited collection of essays as a means of scholarly communication. I contend that the format has an unique role to play in the communication of research both within and outside the universities. I also argue that, although all of the elements of the general theory are real, several have been overstated and none of them are inevitable.

Chapter 2 examines its twentieth century history, and its many and changing functions in humanities publishing. Chapter 3 sets out the overall shape and the individual elements of the critique in more detail, and shows that few of them have firm basis in fact, and those that are so grounded are far from insoluble. The conclusion looks to the future, and to an idea of scholarly community, much occluded, that the edited collection affords.